What you can do with your old garage door: Garage Door Ice Rink

What would you do if your garage door was damaged or in need of a serious upgrade? You would invest in a new one of course, it’s the obvious solution. What we really want to know is what you would do with your old door, the one you would replace. Most of us, as in probably 98% of the population, would get rid of it, throw it away in the dumpster or give it to their local garage door dealer so they can get rid of it for them. But a man in Québec thought outside the box and surprised all of us with a genius idea.

Working in the garage door industry, he would see dozens of outdated door panels being thrown away every day. One day, he had a brilliant idea. He gathered these damaged or old garage door panels and used them to build an awesome ice rink in his backyard. Now, he can enjoy a friendly hockey game with his kids, his friends and with his neighbours. He can also use it as a soccer field during the summer! 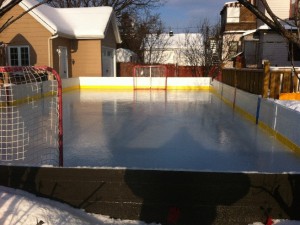 It looks like a lot of work, but it’s much simpler than you may think. First, round up the panels you plan on using, then measure the outlines of your desired ice rink on a flat surface in your backyard or in a communal area if your city allows it. Once the area is set up, begin building your rink by framing the perimeter with your garage door panels. You can strengthen the perimeter with rink brackets, either homemade or commercially constructed. You can even use 1’x2’x16″ landscaping spikes or rebar pounded into the ground to support the boards. Next, put down a plastic tarp on the entity of the designated rink area. This plastic tarp will hold the water and will allow you to flood your rink as soon as the temperature permits it, with or without snow. And voilà! All you need now is cold weather and skates!

You could build an ice rink like this, but you could also think of something else that requires a little less time and effort. There are so many possibilities of creative and original projects, such as the ones presented below.

So use your imagination and creativity and save those garage door panels you were thinking of throwing away. You might surprise yourself and create something incredible!